Required Resources
Read/review the following resources for this activity:

Instructions
For this assignment, respond to one of the following options:

Option 1: Find a recent article (less than one month old) from a reputable news source concerning a Free and Fair Trade issue between at least two countries.

Option 2: Find a recent article (less than one month old) from a reputable news source concerning a proposed budgetary change.

Capitalism supports the concept that the people control the means of production with little to no interference by government. Capitalism is based on the idea of a market driven economy. This theory believes that the market (or the masses) drive what is produced by industry with their demand for products. For example, if a large number of people desire a certain item, then those who produce it will stay in business as long as the demand continues. However, if demand lags, the same industry will have to evolve to produce another in-demand product or leave the market. This demand for products thus drives what is produced and determines which industries flourish. This system, in its purest sense, leaves government out of the economic process. Adam Smith’s The Wealth of Nations (1937)advocated for this type of economic system. However, over time, it became evident that some regulation of business was needed. For instance, government intervention has been needed to prevent monopolies from forming in order to keep the market competitive. One example was curbing the railroads’ domination of transportation and shipping in the early 19th century.

In contrast to this model of low government involvement, socialism calls for the complete control of production by government. This theory was formed by Karl Marx and Friedrich Engels, two political philosophers, during the 19th century in their work The Communist Manifesto (2004). These men lived during the industrial revolution when people were suffering in harsh working conditions produced under pure capitalism. They believed that if they presented a new economic plan, they could create a happier world for the individual. This world included the human rights of the liberal, but went even further to ensure an equal distribution of wealth and goods to the masses. Their theory argued for a socialist transition where the government seizes all the means of production as a way of creating the pathway to communism (or a perfect utopia). 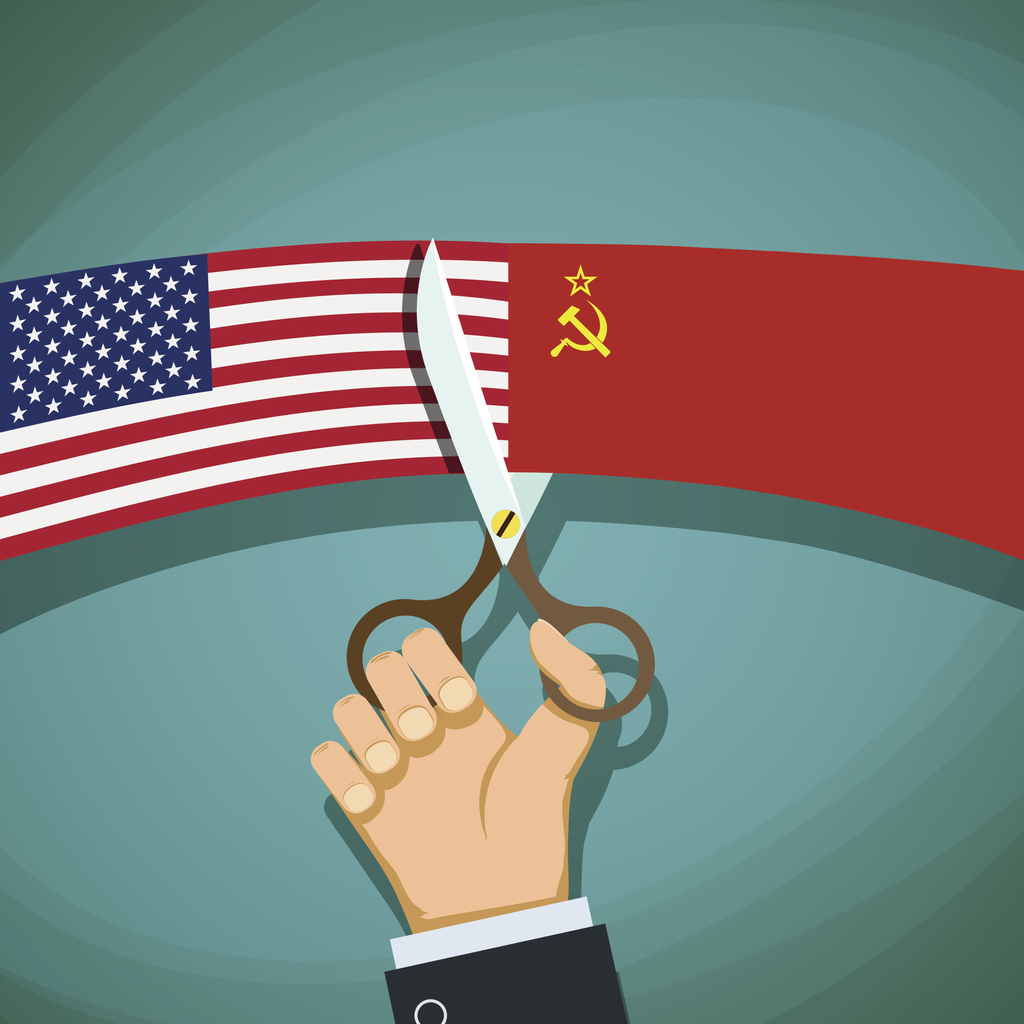 When trying to implement any theory, variations in practice can occur. A variation is exactly what happened when Russia, the first country to implement the teachings of Marx, overthrew its government. This revolution produced Marxism-Leninism which varied dramatically from Marx’s proposed plan. Whereas Marx promoted a classless society, Leninism favored a dictatorship to mold society. The modified ideology, which changed even more over time, resulted in many years of conflict with the West during the Cold War. The principal powers during that time, the United States and the Soviet Union, featured two completely different philosophies regarding government and politics. In the end, the Soviet Union’s political, governmental, and economical approaches proved to be disastrous for its society. It featured a political process that decided who got what, when, and how in the most arbitrary manner. It also used the government to execute those decisions brutally and ruthlessly. In the end, Soviet citizens, tired of being told they were part of one of the world’s great superpowers while waiting in line for basic necessities, gradually withdrew their interest in and support of their government. The system eventually collapsed.

The paths that take nations to democracy are rarely straight and never identical. The same can be said for those societies opting to embrace a market economy. The most successful economic system currently is capitalism, but capitalism has evolved and continues to evolve differently in various countries around the world.

For half of the last century, many countries around the world operated under an economic system different from capitalism. The Cold War between the communist Soviet Union and the capitalist Western world guided much of the international and domestic politics of the twentieth century. As communism eroded in the face of global markets, the largest of the communist superpowers (Russia and China) moved toward market-based economies.

Capitalist countries have also seen changes in the market over the past 75 years. The “free market” does not exactly exist in any democratic country because concerns about social well-being have caused most governments to establish some kind of safety net to protect populations from the harsh realities of the market. Programs such as Social Security are examples of this safety net in the United States.

Theoretical distinctions can be made between different democratic countries and their economic development. An example of such a distinction presented in the field of political science categorizes countries’ economic systems based on how active the government is in the economy. Gosta Esping-Anderson (1990) writes in The Three Worlds of Welfare Capitalism that these economies can be categorized as laissez-faire, corporatist, or social democratic. Laissez-faire economies are those that remain most closely tied to the free market. Governments in these states have little democratic control over the economy and tend to allow the market to control prices and income distribution. Switzerland and its banking industry are a good example of this type of economy. Corporatist economies have strong centralized governments attempting to balance income distribution and market concerns between the democratic population and the private sector. Fascist Italy under Mussolini was a corporatist state. Social-democratic countries are those in which the government owns many social services and heavily regulates private industry. This type of system was seen under Hugo Chavez’s reign in Venezuela.

As you might imagine, with so many different economies operating in the world, the international sphere as a whole has an economy of its own. Countries have to compete for business and businesses have to compete for consumers. Trade agreements and restrictions are established to make these competitions equitable and productive. As Russia and China become increasingly powerful on the world economic stage, the international political and economic landscape continues to change.

The emergence of new economic powers is not the only pressure on the international economy. Political issues such as wages, immigration, export controls, taxes, and employment all factor into decisions that impact global markets. Citizens are going to have to make difficult decisions relating to many concerns of this new global environment in the coming years. Should national sovereignty be given to international organizations? Should businesses that pay low wages in other countries be allowed to export these goods? Must governments ultimately regulate the economy or can the free market solve these problems without interference?

The American economic system is very complex. It is considered a laissez-faire economy, but this does not mean that it operates in an entirely free market. There are rules and regulations in place to protect the market,and the businesses and people operating within it. Some of these safeguards were developed during the New Deal, under President Franklin D. Roosevelt, as a means of lessening the impact of the Great Depression. These protections are referred to as welfare programs.

Welfare is a term applied to social programs that contribute to the overall welfare of the citizens and these types of programs usually develop when there is a great need within the populace. For example, during The Great Depression, inflation rates made the dollar lose its previous value. This devaluation resulted in the suffering of a large portion of the population because many could not pay their bills or buy basic necessities such as food.

Although welfare programs serve purposes, they are not free. The problem of paying for welfare or safety net programs falls on every nation that offers them which is why there is always much deliberation regarding these programs. The United States offers far fewer social programs than its European allies—based upon its laissez-faire approach—and yet there is always much discussion about their existence. American conservatives tend to support a reduction in funding of such programs whereas liberals usually argue for an increase in their funding. No matter which side of the debate you fall on, there is little doubt that the question as to whether or not their cost outweighs their benefit will continue for years to come.

In February of each year, the President submits a budget proposal to Congress for approval. This proposal is based on the President’s priorities and what he/she believes will pass in Congress. Once the plan is made public, many interests will scrutinize this proposal to see where spending will take place.

The next step is for Congress to consider the President’s proposal. Congress can approve or disapprove the budget items and they can add or subtract from the President’s proposal as they see fit. This phase of the budget is very complex as it must pass through several Congressional committees before receiving a full house vote. Budgets are generally initiated in the US House of Representatives while the US Senate is seen as a source of review to ensure equity. The President must approve the final budget legislation after it passes both Houses, preferably before the beginning of the new fiscal year in October. In recent years, Congress and presidents have struggled with this process and temporary legislation or continuing resolutions have had to be enacted to allow the government to continue operation. Government shutdowns or partial shutdowns have affected the economy negatively and caused anxiety among workers in regards to their paychecks. 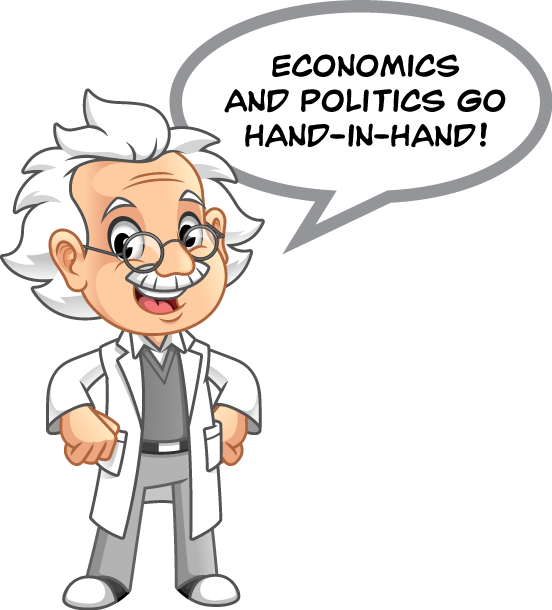 In the matter of economics, it is clear that a country’s politics come into play. Decisions regarding regulation of economic matters have a direct impact on a government’s success. Countries use different methods and mechanisms to ensure success. Some democracies use a type of socialism, democratic-socialism, to maintain a robust social safety net to help less fortunate people through a redistribution of wealth. However, democracy survives because the people are still represented and vote. The people have the ultimate power. Some democracies are libertarian, keeping the government at a safe distance so as not to trample individual rights. Even non-democratic countries such as China play an important part in the global economy. China is a major global trading partner and has one of the largest exporting economies.  The question we might ask is what role will the global economy have on countries’ political systems in the future?

Changing economic practices and polices effect budgeting. Every country must account for these changes due to the interdependence that globalism brings. Each nation tries to balance its trade practices and ensure the welfare of its people. Globalization has introduced more variables into the budget mix and the role of governments continue to be questioned.

Continue to order Get a quote

Calculate the price of your order

The price is based on these factors:
Academic level
Number of pages
Urgency
Basic features
On-demand options
Paper format

Delivering a high-quality product at a reasonable price is not enough anymore.
That’s why we have developed 5 beneficial guarantees that will make your experience with our service enjoyable, easy, and safe.

You have to be 100% sure of the quality of your product to give a money-back guarantee. This describes us perfectly. Make sure that this guarantee is totally transparent.

Each paper is composed from scratch, according to your instructions. It is then checked by our plagiarism-detection software. There is no gap where plagiarism could squeeze in.

Thanks to our free revisions, there is no way for you to be unsatisfied. We will work on your paper until you are completely happy with the result.

Your email is safe, as we store it according to international data protection rules. Your bank details are secure, as we use only reliable payment systems.

By sending us your money, you buy the service we provide. Check out our terms and conditions if you prefer business talks to be laid out in official language.